In the spirit of WREN’s Wetland Wanders held the second Tuesday of every month, I recently embarked on a West Eugene Wetlands adventure with two of my BLM colleagues, Forestry Technician, Colin Sayre, and Plants Biological Technician, Christine Calhoun as well as BLM’s GIS Specialist and Acting Assistant Field Manager, Bernie Hoffman. Our journey took us to a spacious, 5-acre, mixed oak savannah and wet prairie nestled along the Long Tom River between the towns of Cheshire and Veneta where we settled in to monitor the recently down-listed species, Bradshaw’s lamatium. 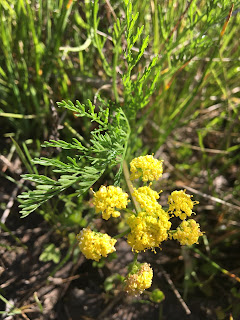 Brandshaw’s lomatium, or Bradshaw’s desert parsley, is a low lying, perennial species that grows from a slender tap root. Its pinnate leaves are reminiscent of delicate carrot fronds and its small, yellow flowers are arranged radially in clusters called umbels. Bradshaw’s lomatium is generally found in wet habitats where the soil is clay-rich, near creeks or small rivers. Threats include habitat loss due to agriculture, commercial and residential development, encroachment by shrubs and trees, and competition from weedy invasives. 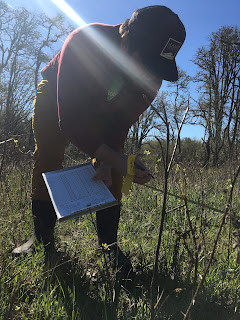 The best time to survey and monitor this species is from mid-April to May when the plant is in flower. I learned from experience that this is due to the fact that the short, delicate carroty leaves can easily be overlooked or confused with any number of plants that make up the green, vegetative expanse of the wet prairie. We began by finding one of the four, 30+ square meter plots on site with a GPS. Then, Colin and Christine attached a large tape to one end of the transect point and unrolled it to the other end of the transect line to mark an ‘x’ axis. Two additional measuring tapes were used on the ‘y’ axis to create a system of monitoring the plots one square meter at a time. Searching for the Bradshaw’s lomatium brought to mind memories from childhood spending hours meticulously looking through a field of clover for the one with 4-leaves. The process was slow and meditative, allowing the observer ample time to appreciate the other Spring wildlife that inevitably appears when one is patient and looking closely, such as young Northwest garter snakes, small orb weavers and crab spiders, voles, eagles, and Pileated and Acorn woodpeckers. One can’t help but appreciate in these moments all that Spring has to offer! After the data has been collected, it is recorded on a series of sheets used by Technicians to input into Long-term data files and will provide evidence for restoration measures. 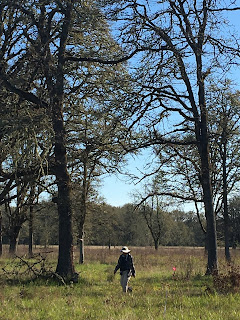 It wasn’t very long ago that Bradshaw’s lomatium, or Desert Parsley, was listed as an Endangered species. A number of factors are required in order to reclassify a species from Endangered to Threatened. Most importantly is evidence to support that the species population is growing and that it has  high quality habitat to support its growth. Yearly monitoring is the best way to document how well a plant species is doing so that a plan for protection and management can be put into place. This requires the dedication of restoration ecologists who have an interest in protecting these important resources and a supportive community. Plant monitoring programs, such as the one I experienced this Tuesday with my BLM colleagues, help us allocate land management resources and plan restoration efforts. Monitoring efforts also give us an understanding of the occurrence, distribution and status of plant populations in vital wetland units. The data collected through plant monitoring helps make sure that threatened and endangered species receive continued protection and assistance and ensure species biodiversity.

Thanks to monitoring programs and the efforts of my colleagues and other Wildlife Technicians, the West Eugene Wetlands is now down to three threatened and endangered species; the Fender’s Blue butterfly, Kinkaid’s lupine (the nectar plant for the Fender’s blue butterfly), and the Willamette daisy. After participating in monitoring efforts, I see the value in the work and have renewed hope that, with continued efforts and support, all of our West Eugene Wetlands species will be considered common, once again. 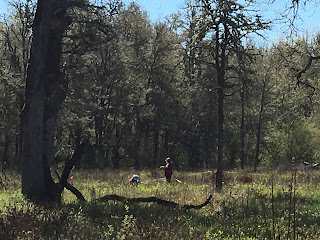