Educating educators in the wetlands. 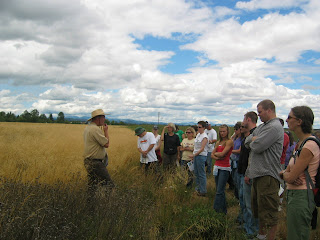 A group of 28 educators gathered today in the wetlands for a part of their week long teacher training workshop. WREN sponsored their academic wetlands day in conjunction with Summer Institutes. After an overview in our yurt, the group convened at Sandpiper pond for an exciting dragonfly walk with our renowned local authors Steve Gordon and Cary Kerst. Several damselflies, a Boreal Bluet just to name one, were temporarily caught for a closer look as well as a few dragonflies including a Black Saddlebags. Our next stop found us at Meadowlark Prairie overlook for lunch where a Great Blue Heron, hundreds of acres of Tufted Hairgrass and many happy hikers were spotted. Then on to Checkermallow access for a walk through Dragonfly Bend with our restoration expert, Paul Gordon. The teachers got a special insiders look at one of the West Eugene Wetland Partnership's better quality restoration sites. 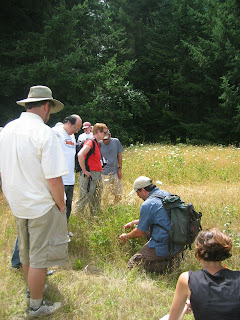 Our final walking segment took us through Willow Creek Preserve with Rick Ahrens, local naturalist, and Matt Benotsch from The Nature Conservancy. We caught a look at a Lazuli Bunting just after parking our (carpooled) cars, and on the walk we of course had to stop at the Kindaid's Lupine for a brief discussion on the Fender's Blue Butterfly life cycle. And last but not least, our very own Liz Myers presented a look at our local geology and the volcanic source of our special wetland soils.
Thanks to our walk leaders, and thanks to the teachers for taking the time and energy to visit us!!! 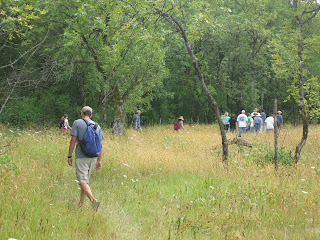 Busy day in the wetlands!

Today there were 3 events in the wetlands!

There was a walk with the Mossback Volkssport Club. Here are some walkers returning to the yurt… 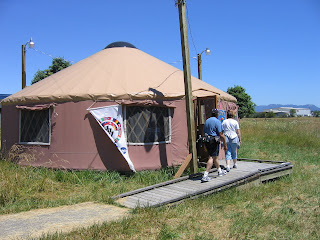 There was a First Saturday Park Walk with the City of ’s Outdoor Program.

And there was a WREN sponsored dragonfly (and damselfly!) walk with Steve Gordon and Cary Kerst. We went out to learn about Odonates in (for some!) and around the vicinity of Grimes and Sandpiper ponds. Check out this action… 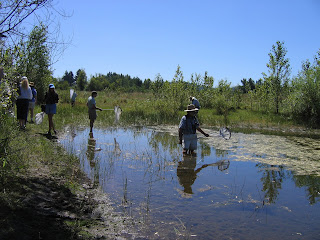 We saw:
Common Whitetails – one beat-up looking male was netted for close-up viewing, and here is an immature one 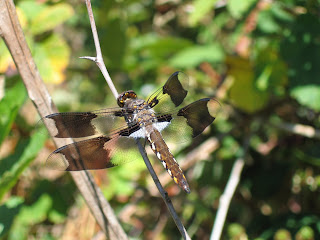 Black saddlebags – another male netted with only 4 legs!
(pictured here) and Steve pointed out the details… 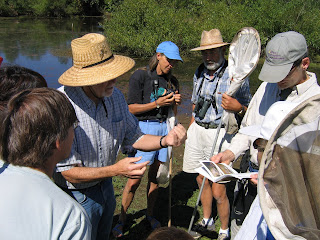 …like pruinosity, the wing nodus (nodi?), appendages, ovipositors, and the “swiss army knife” sexual apparatus on the males. 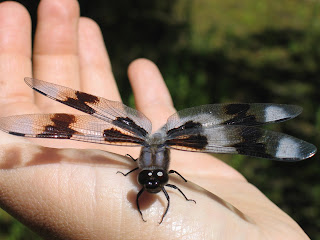 Both male and female Western Pond Hawks were netted, here is a young male hanging on to a willow leaf 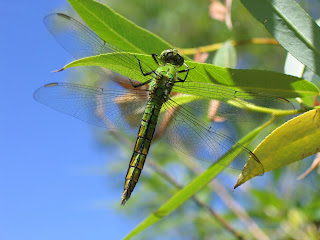 And here is an older Western Pond Hawk 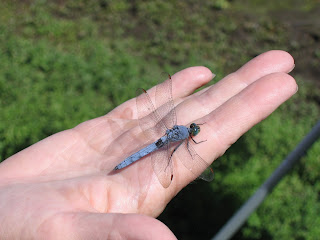 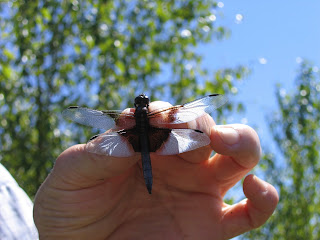 There were damselflies too!
Pacific Forktails – a male was netted as well as a female with blue coloration
Many Lyre-tipped Speadwings were seen and several mating pairs were netted

There was other wildlife out there too… We heard a Green Heron, saw a Great Blue, a Kingfisher, and an Osprey (please let me know what other birds were seen and heard!) The penny royal was blooming and odorific. Queen Anne’s Lace was blooming and we saw beaver chew. There were fish in the ponds (we’re not sure how they got there) and just as we got back to the road we were greeted by this guy 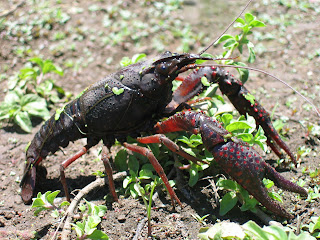 Another great day learning in the wetlands! Jason (this post’s photographer) and I treated ourselves to a dark chocolate dipped frozen banana on the ride home… 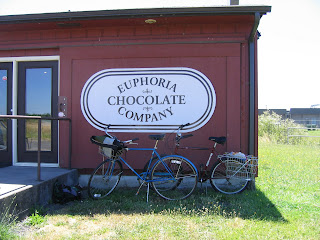