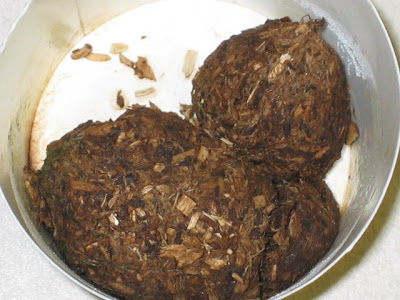 So what was in that mystery package our friend Elvira sent? No guesses? It was scat from a wetlands mammal, the beaver! Normally we don't see beaver scat because beavers poo in the water. Elvira was helping with a scientific study in a pond in Portland, and came across some beaver scat caught in the grass underwater. Wow! It looks like a ball of sawdust, doesn't it? That's because it kind of is a ball of sawdust. Beavers eat bark so they excrete (a fancy way of saying poo) the bark after digesting the nutrients from it.

Foxes, coyotes and mice, oh my! 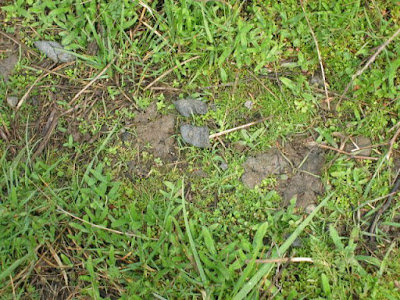 If you've been reading our blog recently, you may notice that we have a tendency to get excited about SCAT! (By the way, anyone have any guesses as to the identity of the "mystery mail object" from a few weeks back?) So, for this week's post, we were excited to discover a large amount of carnivore (that means meat-eater) scat just outside our educational yurt. We've always known that nutria live under and around the yurt, but this was a new finding altogether!
Not only did we discover the scat and trails around the yurt, we were lucky enough to go out last night with Dave Walp, tracker extrodinaire (great at lookin' at tracks). He confirmed that we were looking at carnivore scat, from either a fox or a coyote. It is more likely fox, although the size of this pile tells us it could be a coyote. 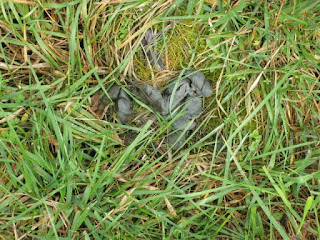 William, our resident site-host, will be keeping a look-out at night when he's here to watch for critters, and will be sure to let us know if he sees anything.
As for other animal signs to piece together this puzzle, next to the side door we found a pile of tiny bones, probably from a mouse. Just under the doorstep were these larger bones, as yet unidentified. 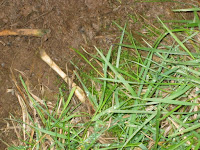 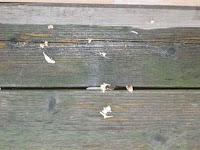 The wetlands are always full of surprises, especially this time of year. If we find any further evidence in this scat/bone mystery, we'll be sure to keep you posted!
Posted by WREN at 3:57 PM No comments: 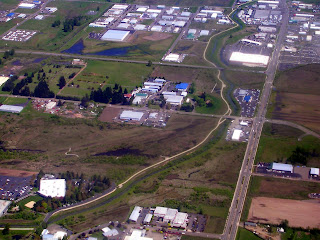 (Photo above: Ariel photo of Tsanchiifin Walk, the open area in the lower left quadrant of the photo. The runway strips from the air park in the 1940s are still slightly visible. West 11th/Hwy 126 West runs through the right side of the photo). Take the Tsanchiifin Walk in the West Eugene Wetlands any time of year, and you will encounter remnants of the rare Willamette Valley wet prairie habitat succeeding through restoration and protection. This 3/4 mile trail, just north of the Amazon Creek Bike Path where it intersects Danebo Ave, offers an easy walk through the wetlands. Look for kestrels on the hunt for the next meal, signature marks left behind by a beaver, and dragonflies slicing through the late summer heat. Listen for Pacific Tree Frogs throughout winter, the croak of a Great Blue Heron gliding over head, and the Western Meadowlark as it welcomes spring with its distinct warble. Six new interpretive signs along the trail, designed by local artist Denise Dahn, colorfully illustrate this habitat: the life cycles of the Pacific Tree Frog and dragonflies, the key roles of Tufted Hairgrass for wetland habitat, a spotlight on the little brown bat, and an overview of the present site, as well as its history of human presence.

Formerly known as the Balboa Trail, the Tsanchiifin Walk was renamed in honor of a local band of the Kalapuyan people who occupied the southern end of the Willamette Valley until the 1900s. Past land uses, attempts to mitigate those uses, and natural conditions create a complex mosaic of upland and wetland. Previous drainage for agriculture and dairy farms, and later the use of the site as an airport (Thunderbird Air Park) in the late 1940s and as a drag strip (Balboa Drag Strip) from 1968 until 1979, have left man made ditches, portions of a paved runway and graveled taxiways on fill. These form linear uplands in what otherwise would have been an expanse of natural wet prairie. Borrow areas excavated for fill to build the runways and taxi-ways now form emergent wetlands. An assortment of fill has been dumped unevenly over much of the northwest and southeast corners of the site, and adjacent to Atlantic and Pacific Avenues to the north. Fill from past channel dredging lies in several spots along Amazon Creek. Today, restoration and interpretation takes top priority at this site. The wet prairie provides clean water and homes for wildlife, as well as opportunities to learn more about the ecosystem and human impact on our natural world.

The Tsanchiifin Walk is directly across from the future site of the West Eugene Wetlands Education Center, and the standing West Eugene Wetlands Office, a red farm house at 751 S Danebo Ave. If the front door is open, help yourself to maps and brochures. The gate is open 6 a.m.-11 p.m. every day of the year.
Posted by Windy at 10:22 AM No comments:

Last evening
I walked past the lighted building
where we would meet for dinner,
and drawn by the chorus of frogs,
continued to the bridge.
In the growing dusk,
faint, scattered, white clouds floated
on the surface of the vernal pool.
For a moment the voices continued.
Then, as if responding to an unseen conductor,
the music began to stop,
each section ending
its part in the round.
From east to west
the pond became silent.