A lovely surprise on Amazon Creek!

As I was riding to work today along the Fern Ridge Bike Path (near Garfield Street), I stopped to watch a green heron hunting along the banks of Amazon Creek. It was obviously looking at something in the water, and I waiting for it to strike its next meal. To the surprise of the heron and myself, an otter’s head popped up, looked at both of us, and then dove down again.

It was such a pleasure to watch these two beautiful wetland animals in one exciting moment.
Posted by Holly McRae at 2:26 PM No comments:

After starting the day seeing an otter in the creek, my day ended with an amazing bike ride out to Meadowlark Prairie. The highlight was a western pond turtle basking on a log in the creek, just south of where the bike path crosses the railroad tracks. And so many birds singing this time of year! I got great close-up views of western meadowlarks, killdeer, red-winged blackbirds, wigeon and green-winged teal, in addition to the usual herons, mallards and Canada geese flying overhead. Pheasants were calling from all directions, and special appearances were made by a pied-billed grebe, a kestrel and a northern harrier being chased by a crow.

There were also lots of folks using the path for everything from roller-blading to bike rides with babies. How lucky we are to live in a community filled with people who can appreciate the beauty of our native landscape!
Posted by Liz Myers at 5:26 PM 1 comment:

First Otter of the Year!

This morning around 8:30 as Holly and I were riding our bikes to work we noticed some strange movement under the surface of Amazon Creek. We were on the Fern Ridge Bike Path crossing underneath W. 11th. We knew immediately that it wasn't just another nutria-whatever it was was fully submerged and swimming away from us, upstream. We followed it upstream until it poked its head out of the water...sure enough it was a river otter! Charlie Quinn, who works for The Nature Conservancy, happened to be riding by and joined us as we watched for another glimpse. Otters are smart, and pretty skittish, so once it saw and heard us it was reluctant to show its head again. But we waited it out and sure enough got another couple quick glances.

As we had to get to work, we continued downstream, where the otter was now headed. We eventually got far ahead of it, but looked back in time to see several mallards fly quickly out of the creek corridor-no doubt alarmed by the predator heading their way.

Several folks from WREN were seeing otters regularly last summer and fall, but this was the first sighting in several months! What a great way to start the day!
Posted by Liz Myers at 1:25 PM No comments:

You may have noticed that we have removed the "wildlife" portion of this blog title - it's just not fair to the plants, especially since so many are blooming now! Enjoy!

As I was biking home from the WREN office (affectionately known as the “red house” because it is, after all, a red house) this evening I spied a cinnamon headed duck in the Amazon creek, in the vicinity of the Elmira Automotive “comfort station”. Luckily the brakes on my cruiser did not flush them! Also lucky that I had my trusty lightweight binocs with me. With the wonderful light and the ducks so close I got some amazing looks at the 2 males and one female. They were near a pair of mallards, of which the male didn’t seem to keen on this trio of smaller ducks.

Here’s a photo from the internet: 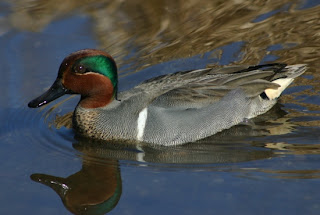 Posted by elvira at 6:12 PM No comments:

Rick Ahrens has taken a look at the mysterious bird – which is still in the Amazon and can be seen between Garfield and Oak Patch – and has determined that it is a Muscovy. They are domestic ducks originally from Mexico/Central America. Perhaps this female has a Mallard parent – judging by its orange legs!

In the last week, there have been several sighting of a pair of wood ducks just down stream from the Danebo bridge! That’s exciting!

This morning as the bright sun melted the frost, I got a great look at the male western meadowlark which has been seen – and heard – in the tops of the ash trees in recent weeks. The yellow of its chest was amazingly bright! I also spotted a flicker, several sparrows, and heard tons of red-winged blackbirds.
Posted by elvira at 9:09 AM No comments:

WREN had its first field trip after a long season of office work and outreach programs – and what a day for it! The sun sure did feel good. Elizabeth Allen’s class from Life! Lutheran School came out to explore this morning and some of us were lucky enough to spot a garter snake that was also enjoying the sunshine. We also saw a red tailed hawk, a meadowlark, mallards, and lots of red winged blackbirds singing and showing off those bright red patches on their wings! Trying not to disturb the pair of mallards in the pond, we dipped nets and found mites, beetles and other life. A great day!
Posted by elvira at 11:51 AM No comments:

can you name this bird? 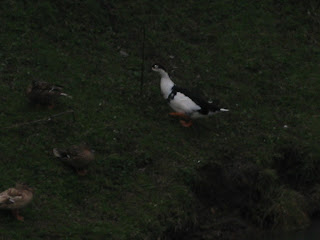 Liz and I have been seeing a very strange duck near the Amazon @ Oak Patch last week and I saw it again this morning. It's hangin' with the mallards but is MUCH larger and even though these pictures are not the best, you can see it is black and white, but it has the bright orange legs like his buddies. 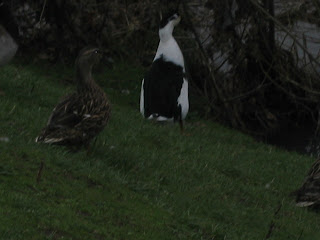