Liz Myers from WREN, Rick Ahrens (local naturalist), and Jason Nuckols and Charlie Quinn from the The Nature Conservancy led a group of about 20 through the (very) wet prairie and upland prairie of Willow Creek Nature Preserve. We covered quite a bit of ground during this hour walk, which was one of the new informal Wednesday Wetland Wanders in the West Eugene Wetlands. We learned about the various projects TNC is doing to monitor the habitat of this nearly 500 acre beautiful site that is nestled up against the southwest ridges of town. TNC staff and their volunteers control several invasive, nonnative plant species to allow a greater variety of species, and promote the growth of rare plants indigenous to the Willamette Valley. They track the birds and animals who call Willow Creek their home, including the Fender's Blue Butterfly (below).

Rick mentioned the Eugene Chapter of NABA, here is a link to their website. We got a brief glimpse of a Red-tailed hawk, and heard the shreik of what Rick believed to be a Red-shouldered hawk, a bird of prey we are seeing more of as they expand their territory to the north. 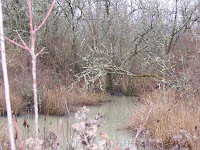 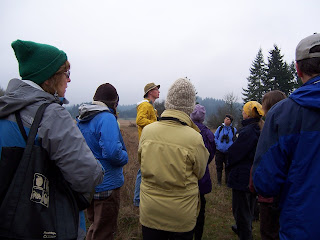 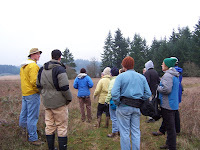 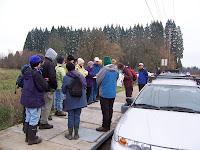 Many in the group had not experienced Willow Creek Nature Preserve before. This area is a treasure that not too many know about. However, the trails are open to the public, and a great variety of plants and animals await curious visitors. Here is TNC's web page about Willow Creek: Here are a couple of other photos of Willow Creek taken at different times of the year: 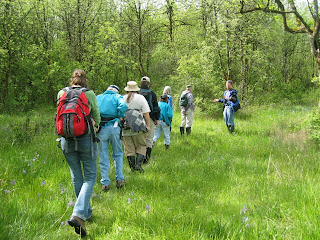 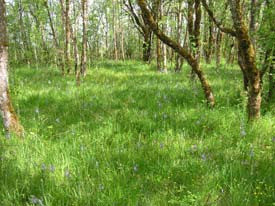 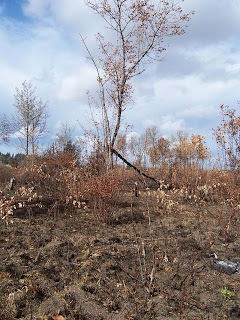 Thank you to all who joined us this morning, we enjoyed meeting and seeing you! For the next Wetland Wednesday Wander we will meet at the view point off Stewart Road to explore Stewart Pond. This will be 9 a.m. January 9. We hope to see you there!
Posted by Windy at 11:23 AM No comments: 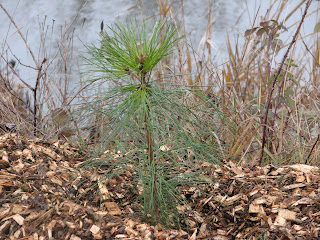 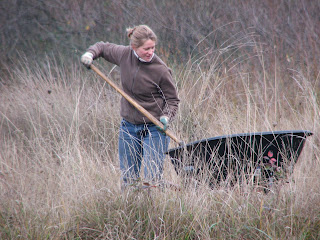 And what a party it was!
We had 20 volunteers out here in the wetlands getting down and dirty with native plants last Saturday. WREN has adopted a section of Amazon Creek just outside our interm Education Center (the Yurt). Saturday we planted 300-400 native Willow cuttings, 12 Douglas spirea, 5 Valley pines, Dogwood cuttings, Brodiea species and 12 Showy milkweed. 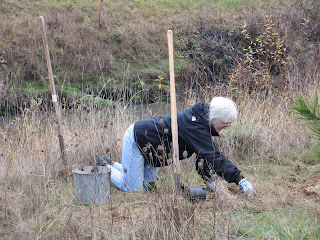 Above is a photo of one of our dedicated and talented volunteers, Mary Morrison. 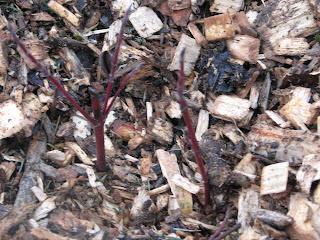 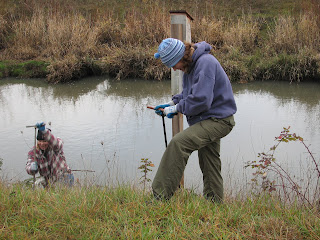 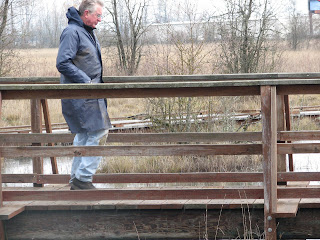 Many, many thanks go out to John Hogan for propagating the milkweed in partnership with the Eugene
Stream
Team!
Posted by Jules at 1:04 PM No comments: 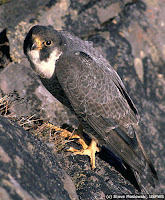 I wanted to post Steve Gordon's account of an early December morning he spent with Cary Kerst last year. This is theatrical story of nature at its best...

This was first posted December 2006 to www.wewetlands.org

This morning Cary Kerst and I went out to cover my Willow Creek monitoring route. We picked this morning last week and decided to stick with it despite the weather updates and the darkness that comes with a Monday morning rain. While on the route, we agreed that once you get dressed properly and get into the field, it is always easier and more comfortable than it sounds from in front of the fire at home.

The first half of the route was usual with some sun, wind, rain, and a little mixed snow. The firs on the hills above the Willow Creek Reserve sported a skiff of white snow. We found a Varied Thrush and a couple of Golden-crowned Kinglets. We heard a sorry excuse for a Chorus Frog trying to croak.

As we ended the route along Willow Creek's east branch, a Red-shouldered Hawk flew westward across the field and banked with its back to us, giving us a wonderful view of the red shoulders contrasting with the black and white checkered wings. We also saw A flock of Juncos mixed with Spotted Towhee, Song Sparrow, three Lincoln's Sparrows, and a White-throated Sparrow. American Kestrels had flown by several times. As another Falcon approached it seemed much lager. It flew overhead and landed nearby in a cottonwood - a Peregrine Falcon! I was sure it was a new bird for the Willow Creek bird list, and the best was yet to come.

As we walked back to the pickup along 18th Avenue, we spotted a White-tailed Kite at Luk-wah Prairie. Then the Peregrine returned and flushed a Northern Harrier. The Peregrine would gain altitude and then dive and fly strongly toward small trees; scaring up Flickers each time. Over and over it repeated this behavior, until a Flicker made a fatal mistake and flew west across the expanse of prairie just south of the old speedway. The Falcon hit it in mid-air and grasped the dead Flicker in its talons. Harriers, Red-tiled Hawks, two Kestrels, and the White-tailed Kite were all flying about and the Peregrine dropped the Flicker. Soon it disappeared to the ground to feast.

The walk in cold rain and snow seemed worthwhile. It was all worth it to watch the Falcon hunt Flickers on a Monday morning. And the Peregrine is now bird number 115 on The Nature Conservancy Willow Creek list.
Posted by Windy at 7:28 PM No comments: