Amazing photos and text are from Cary Kerst.
Thanks for sharing Cary!
The Odonates were flying at Willow Creek on May 25 including Western Red Damsel, Pacific Forktail, Tule Bluet, Vivid Dancer, Emerald Spreadwing, Blue-eyed Darner, and California Darner. There was also a Baskettail cruising over the water. The Western Red Damsel is very small but so beautiful when you take a close look! 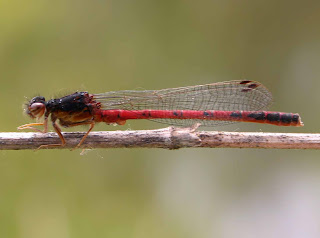 Butterflies in the meadows included the Ringlets, Blues, and a beautiful Lorquin's Admiral that looked like it must have been just out and about. 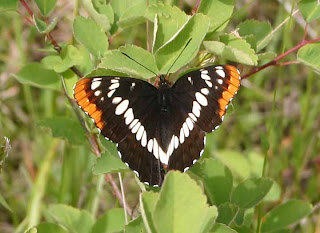 Posted by elvira at 1:17 PM No comments: 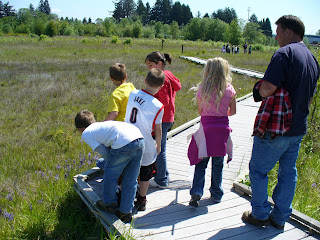 Wow! What a beautiful and exciting field trip in the wetlands! I had so much fun exploring with these well-behaved students. Taking a walk around the Tsanchiifin loop is a great way to experience the West Eugene Wetlands. These kids are growing up to appreciate the natural world.
Here’s some of what we saw…

Birds: (not to play favorites or anything ;) by listing these first)
Hovering Kestrels
Swallows
Turkey Vultures
Mallards – with ducklings
Grosbeaks – this was a highlight for me because I have only seen them one other time: at the Wings and Wine festival last year -- almost exactly one year ago! What a beautiful song!
Small yellow bodied song-bird that we only got a quick look at as it flew past… perhaps a warbler? A goldfinch? Not sure.
Western meadowlarks
Red-winged blackbirds
Great Blue Heron 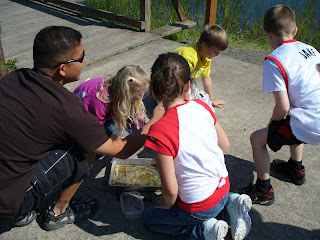 Pond Life:
Tadpoles – some of which are very close to the end of metamorphosis!
Boatmen
Water striders
Blood worm?
And lots of shed exoskeletons as those invertebrates grow!

My group got a look at a damselfly I managed to catch --- a Tule Bluet perhaps?
The wild roses are blooming and smell divine. The Camas are still lovely, the Scot’s broom is very bright yellow, and the lupine are blooming as well. Hope to see you again Camp Creek!
Posted by elvira at 1:52 PM No comments:

Last night WREN held its fist ever benefit concert – a WRENefit if you will. Cozmic Pizza generously hosted it and Mike, Cozmic’s manager, did a wonderful job running sound – thanks a ton!

Here’s a run down for those who missed it… 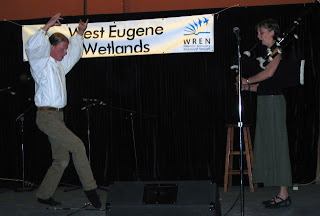 Rich Glauber entertained us with his original nature songs and got some of us to join his rhythm band. Sorry I didn’t get a good photo, but you can check him out here.

Windy Hovey, who does so much for WREN and is generally behind the scenes, played some lovely classical guitar for us. She’s also a grad student – how does she do it?!

Tonn Nua played traditional Irish and Scottish music for us. These young musicians are certainly on their way! 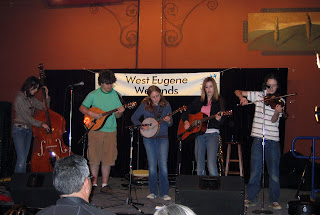 Steve Gordon and Cary Kerst, long time volunteers with WREN, kept the crowd smiling with their fashion statement and clever lyrics. We’ll be sure to let you know about their next performance! 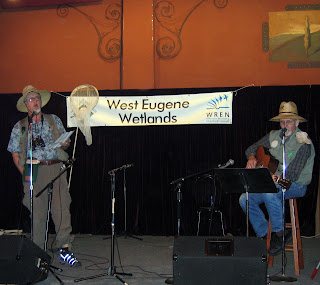 John Cooney, well-known in this area for his weekly broadcasts on KLCC is more comfortable in a recording studio. He graced us with his presence to read a selection focused on the West Eugene Wetlands.

Holly McRae dusted off the accordion to play us a few tunes. She was then joined by Liz, Jules and Windy – aka WRENaissance -- for a rendition of “Froggy went a courtin’”. This is the number one reason to support WREN: to keep these women who work for WREN from singing on street corners! 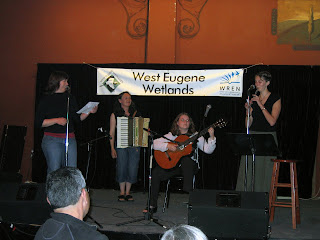 Then, for the headliner, Liz was joined by Kat, Matt & Vash… Circled by Hounds. What great music! We are so thankful they made it to to play for us! 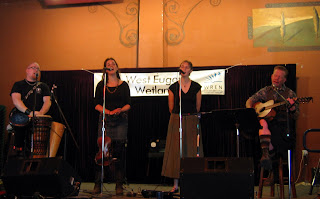 Thanks so much to all the performers for being part of the WRENefit.

the big sit... sunup to sundown!

Today 5 birders worked to identify as many bird species as possible from one place. This was a fundraiser for WREN, whose education effort serves school children through field trips and classroom programs, as well as community events – all in the spirit of wetland awareness and stewardship. The birders collected pledges at a flat rate or at a per species IDed rate.

Here are some shots when we first arrived, just after 6am…including Cary Kerst. 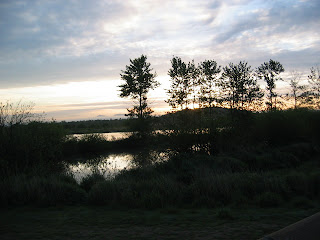 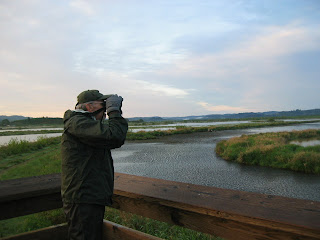 Some of the highlights were seeing a family of 5 river otters! saw them run and dive off an island. The rest of us enjoyed seeing them swimming in the water. Then later on, a flock of gulls caught our attention. We quickly realized what had them excited: a lone otter was loping up the trail (road) toward us! The gulls and the moving reed canary grass were our clues to its movement when it disappeared. But then it reappeared on another trail and ran away from us.

Another major highlight was getting some stellar looks at a family of Virginia Rails! Virginia Rails and Sora (which we only heard) keep hidden most of the time, so this was a real treat. Seeing their 8 chicks was amazing! These tiny jet-black puffs have the tiniest “wings” – nubs really – and the biggest feet! The parents were busy getting critters (like crayfish) out of the muck at the edge of the water and feeding the young. Right in front of us! There were several large bullfrogs in the vicinity… we were a little nervous for the chicks.

In-between the excitement there was indeed time to sit. Here are Cary Kerst and Steve Gordon: 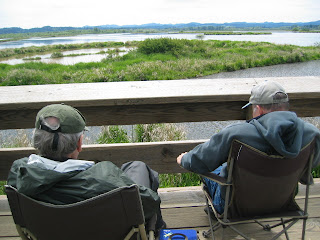 Also feeding young in the muck were song sparrows. They would gather mouthful after mouthful of freshly hatched damselflies – wings and bodies poking out of its bill -- and pass them off to the young, who were incessantly crying for more. Red-wings were also feasting on the flies.

We spied several – perhaps 10 – bald eagles, most of them immature.

We got great looks at a bittern which was very close, perhaps 100 feet, from the platform. Throughout the day we saw several others flying by. They are pros at holding still and have camouflaged coloring. We did not hear much of the classic “gulp, gulp” though! What we did hear a lot of was pie-billed grebes and marsh wrens. of noise for such small birds!

Later in the day the sun came out… here are Emily Steel, Rick Ahrens and yours truly, who happened to get a shot of the same view taken in the early morn… 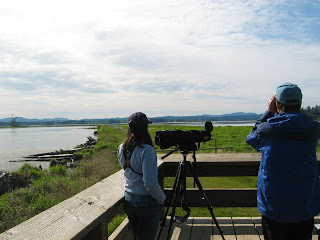 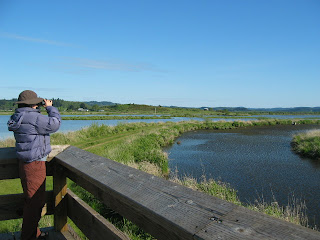 Towards the end of the day after not seeing a “new” species to add to the list for quite some time, Rick spotted a raptor high in the sky. By the time I got a look at it he had IDed it as a peregrine falcon. I noticed that the wings were completely at its sides for a moment. Then it went into a sharp dive to the ground, wings tucked! Wow! It scared some shorebirds but didn’t get one. Awesome! 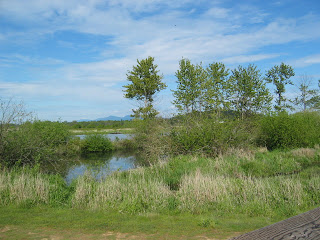 All in all 60 species were identified by the group as a whole – either seen or heard by someone. For collecting pledges made on a per species rate, birders may use the list of species they heard and saw. Here is the list, although a few are not “official” because they were seen during Emily’s walk (marked with a *) far from the platform. Read Steve Gordon's post on OBOL here.

Thanks to everyone who made this possible! We raised over $900 for WREN!! Way to go! Happy Wetlands Month!

Posted by elvira at 9:53 PM No comments: