If you missed the dragonfly walks at Teal Slough and Grimes Pond last Sunday (July 20th), you missed a whole lot of fun! The leaders were none other than Steve Gordon and Cary Kerst. I mean to tell you, you just can’t beat that! These fellows wrote the book on Dragonflies.

There was a 2-hour walk for kids in the morning, and another one for grown-ups in the afternoon. We were each given a net and told to go on down to the pond and catch some bugs. It doesn't get any better than that!

Tim and I played grown-up for the day and attended the afternoon walk: 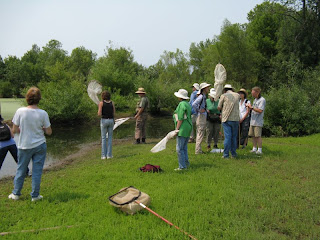 But we hear that the kids netted way more dragonflies and than we did. AND that fewer kids fell down in the mud! It's slippery out there! Three of us big folks went...
d
o
w
n
...ker-splat, including one of our fearless leaders.

Some decided that muddy toes were better at keeping them 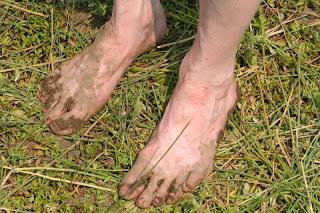 u
p
r
i
g
h
t
than shoes, and ditched their footwear for the day.

Over a dozen different species were netted in all!
One cool thing I learned is that, unlike butterflies, dragonflies are sturdy enough that you can pick them up without hurting them: 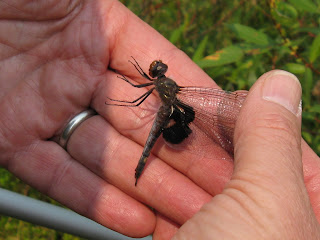 Here's a Black Saddlebags dragonfly. You can see how it got its name. 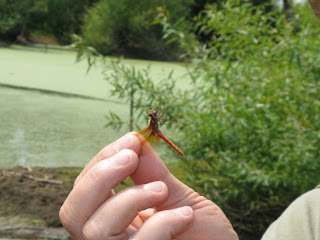 And this is orangy-red one is the
Cardinal Meadow-
hawk.

So, as you see, you can hold them. IF you can net them! Grown-ups, I recommend bringing a kid along!

Mostly, when we released them, they just flew right off to go about their dragonfly business. But one amazing woman had magic hands – they just didn't want to leave her. 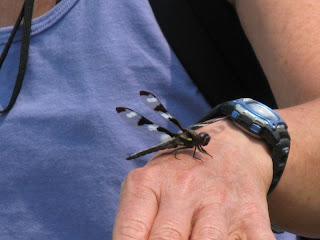 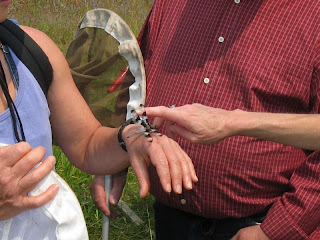 This pretty blue-and-green Western Pondhawk was my favorite: 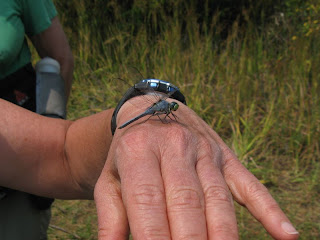 Guess whose hand it's on!

Cary scooped up a bucket of pond water. You never know what you'll find when you do that... 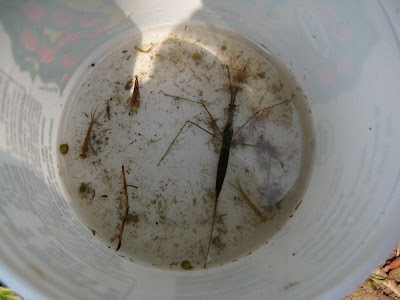 The stick-like fellow at the far left of the bucket is a damselfly nymph. After they hatch, they live underwater for anywhere from 1 to 3 years before they emerge and become creatures of the air!

The whopper of a critter that you see in the bucket is a water scorpion. For amazing facts about water scorpions (did you know they can fly?), check out Cary’s blog entry for April 26, 2008.


There were masses of dragonflies and damselflies at the ponds, but they weren't the only creatures about. We also saw several chorus frogs on willow leaves at Grimes Pond... 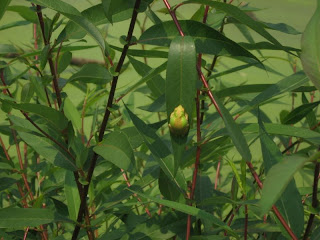 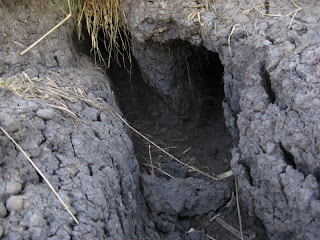 ...and,
on the banks
of the pond
at Teal Slough,
we saw
what we think
might be a
nutria house.


Keep your eyes on the West Eugene Wetlands events calendar for walks like these. Or sign up for the e-newsletter to get your own personal invitation. You won't be disappointed!
Posted by Ann and Tim at 4:39 PM 1 comment:

The creek is dry above 18th street, but the dragonflies and damselflies are still around. 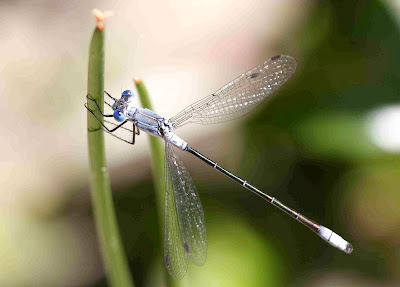 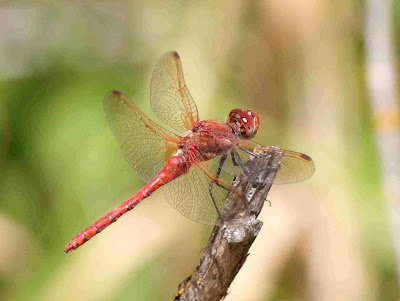 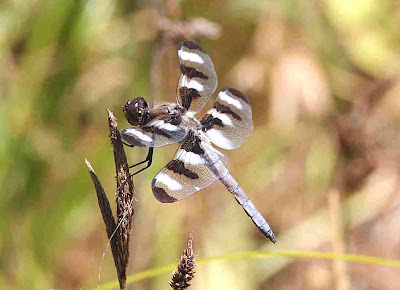 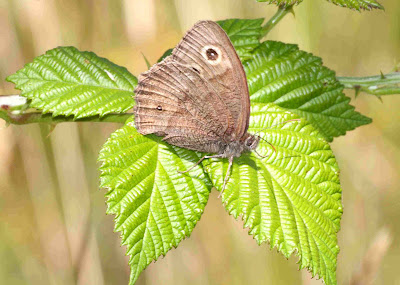 Lets not ignore the Common Wood Nymph
Posted by Cary at 5:04 PM No comments:

One Thing Leads to Another 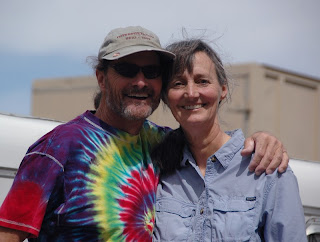 Though neither of us is an Oregonian, at least not yet, Ann and I [I’m Tim—the bearded one] are West Eugene Wetlands Partnership volunteers this summer. How did we, me originally from California and Ann from Maryland, get here? Well, you know how life goes—one thing leads to another. 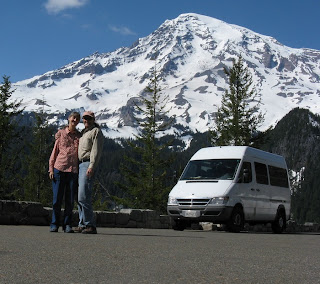 We just happened to be taking this summer off, me from Park Rangering and Ann from retirement, and we were traveling in the Pacific Northwest. Ann’s van, our home on the road, though big for a van was small for a home. You see we are kind of old and like a modicum of comfort. The cramped conditions led us to shop online for a used small travel trailer. 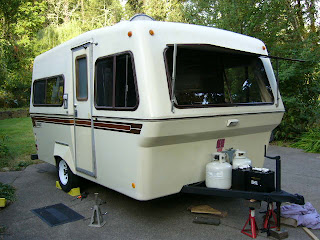 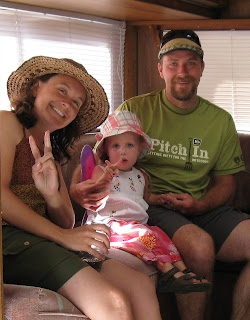 Holly, a green-minded person, works for WREN teaching people about wetlands while Matt, equally green, coordinates Eugene's Stream Team of wetlands volunteers. Avery is a little person, closely related to Holly and Matt, who moved in with them a couple of years ago. Holly and Matt and Avery put us up while Ann and I bought the trailer. [We have named our trailer Patience, which let’s you know what the buying process was like, but I stray.] 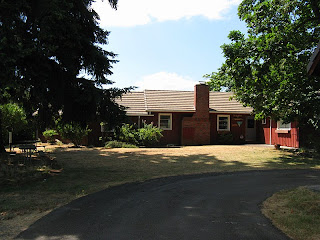 Even before we officially bought the trailer, Holly showed Ann and me the Red House, the headquarters for the West Eugene Wetlands Partnership where Holly works. Ann and I noticed the Red House’s pleasant surroundings, what with regular breezes, mature big-leaf maples for shade, and the bike path and restored wetlands nearby.

“What a great spot this would be to park Patience for a while as Ann and I make her more livable,” I mused aloud. “Well,” Holly replied, “our site host left three days ago, so we just happen to have an opening!” 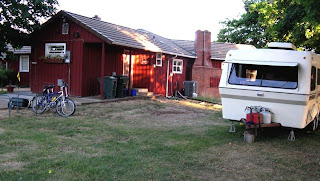 As you can see, one thing has led to another and another and now Ann and I feel a part of the Partnership family, for a couple of months anyway. 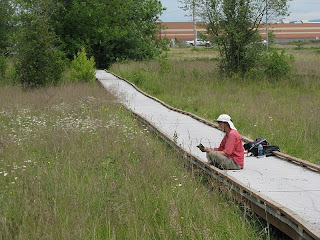 Look for us out on the bike path watching birds, picking up litter, and yakking with folks about the wetlands. 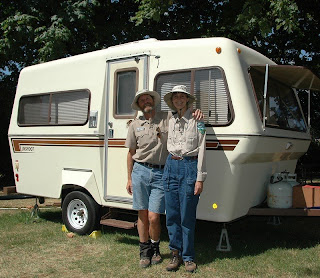 Or, drop by the Red House to see us in Patience, our little trailer house. We’d love to have you say hello.
Posted by Ann and Tim at 11:37 AM No comments: