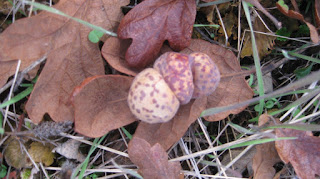 For the past year I've been writing about my walks in the west Eugene wetlands as a representative of the WREN organization. I observed nature in a specific stretch of the bike path from the Terry St bridge to just beyond the railroad crossing.

This is west of the WREN offices. As I approach the beginning of my second year I've decided to move east, over to the Stewart Ponds area. I plan to visit the west side area from time to time but will focus on the Stewart Ponds in the coming months.

As I pull into the lot I recall that there is a pair of raptors who nest every year in the evergreens across the street. As hard as I tried I couldn’t see the nest when it was first brought to my attention. On this day it is still well hidden. The drenching rains are late in coming this fall and the main pond area is still dry. It’s disappointing but I will be using this first walk to scout the paths since I haven’t spent a lot of time over here. It’s a chilly and overcast afternoon with a threat of rain as I begin to walk. A familiar call back near the lot and I see a group of waxwings dipping in and out of the trees near the road. I’ve been able to recognize the waxwing call, flight pattern and of course the distinctive silhouette of the head. The Sibley Field Guide points out that the waxwings get their name from them having waxy concentrations at the ends of some of their feathers which is a product of their fruit diet. 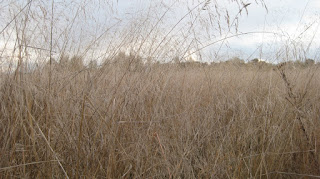 I head out on the wood chip path which was spread by volunteers a year previously during an event celebrating the parks service. The grasses have begun to grow back over the chips but I don't have much time to contemplate how quickly nature grabs back what it can from the humans because two very aggressive Chesapeake Retrievers have taken to charging me from the adjoining property. I instinctively yell at them which slows them somewhat and after a brief survey they apparently decide I'm not a threat and head back.

The fields are greening up from the showers of the past month. The brown fields of late summer are now in a second wave of growth. Frogs chirp down in a low spot, quieting as I approach. The trees in this area are a muted palette, more like a Dutch landscape painting versus some of the vibrant Warhol colors of the ornamental maples around town. I love to see photos comparing areas of nature or even urban settings taken 50 or 100 years apart. As a kid I walked through the woods in my neighborhood a lot. Once I came across an old house foundation that was barely visible. Nearby was a goldmine-a dumping area from probably 100 years earlier. It was filled with old bottles, decomposing metal cans and even a horse skull, great fodder for a young imagination.

I squint a little and try to imagine what this field looked like 50 years ago. Was it being farmed? Was it wooded or thick with blackberries? Were there native peoples in this very field 300 years ago? I’ve learned to watch the ground, the trees and the sky on these walks. There is little bird or animal activity but I do see much scat or animal droppings from many different animals. I keep walking the property perimeter. There are many well-used animal paths crisscrossing the field. A small pond offers up some tracks, raccoon and nutria are the likely visitors.

A trio of crows gab as they slowly fly over. A jay lands on a branch and then I hear a whistling call that could be an eagle. I also hear a kingfisher’s unmistakable call. I quietly come to the edge of a larger pond and see a dark duck with an olive bill. It departs quickly and I’m still not sure what it was. If it was an American Black Duck it’s far from home. I need to sharpen my identification skills!

Flickers fly over towards the oaks and chickadees pop in and out of the brush. On the trail heading back to the car I notice the grasses in the setting sunlight. They are fine and ghostlike in the light, beautiful, unlike anything man-made. Back on the road juncos flit through the bushes. I’ve learned to identify them by the flash of white under the tail.

Soon the rains will bring the waterfowl but for now I can appreciate the finer details of the Stewart Ponds.

I am not an expert in any way regarding the natural world. I am a novice who loves to be out in this world. It’s a fine respite from the daily grind of work. I find something new on every walk. I continue to learn if nothing more than how much I have to learn. It’s been a perfect way to spend a couple of hours and I head home relaxed and recharged.